Vanity Fair is putting up a paywall -- the increasingly universal signifier of quality independent editorial which can’t survive on ad revenue alone. As is usual in such situations, there’s a letter from the editor, Radhika Jones, introducing the change. And in the middle of the letter from the editor, at least when I was reading it on my iPad this morning, there’s a link to a piece of “sponsor content”. If I may, let me introduce a screenshot as Exhibit A: 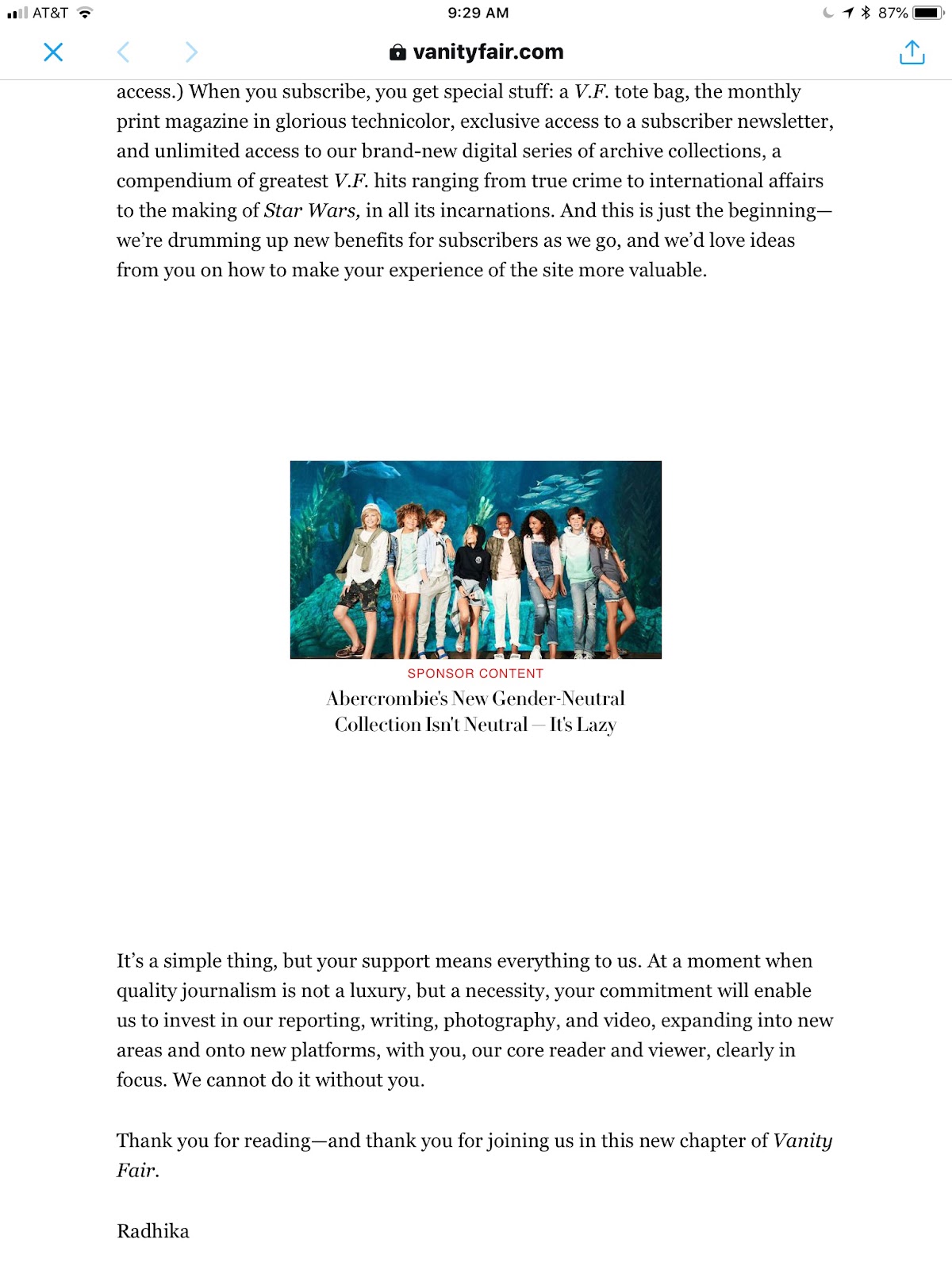 The “sponsor content” in question is this article from Them, which is also a Conde Nast publication and which also aspires to publishing quality independent editorial. What you see here is a form of “recirculation”: it’s a way of driving traffic from one Conde site to another. But the labeling is weird. Them isn’t a sponsor of Vanity Fair’s website, so much as it’s just a fellow arm of the Conde Nast empire.

Here’s the question, though: Who cares?

Exhibit B, also from Conde Nast: a video about chef’s knives, from Epicurious. Knifemaker Will Griffin nerds out on all the ways that knives can differ from each other — carbon vs stainless steel, blade shape, blade thickness, hidden tang vs full tang handles, you name it. As a rule, each demonstration features a Wusthof chef’s knife, on the one hand, compared to some exotic Japanese beast, on the other. In other words, the Wusthof blades get a lot more on-screen time, and a lot more attention, than any of the others, including Griffin’s own hand-forged knife.

Why is that? Was this sponsor content? Did Wusthof pay Conde to have its knives so prominently featured? If so, why isn’t it labeled as such?

These are interesting questions, perhaps, for media nerds. On the other hand, who cares?

One more exhibit, if I may, from Business Insider. Earlier this month, the site started blogging excerpts from Brad Stone’s 2013 book The Everything Store. On April 13, Kim Canales wrote “The unlikely way Jeff Bezos became one of the first investors in Google, which probably made him a billionaire outside of Amazon”. On April 17, Shana Lebowitz wrote “Early Amazon interviews were so tough, one comment could disqualify a job candidate immediately”. On April 20, Prachi Bhardwaj wrote “Amazon executives sat through a brutally uncomfortable 4.5-minute phone call that showed them just how much Jeff Bezos cares about customers”. That same day, Lebowitz returned with “Jeff Bezos was profiled under a pseudonym at 12 years old — and he was a remarkable kid”. And she wasn’t finished: on April 23 she came out with “One of Amazon's biggest challenges in its early days was solved by an obscure book about lichen”.

All of these posts were single-source items, taking a page or two from Stone’s book and repurposing that material for blog fodder -- a practice Stone’s Bloomberg colleague Ashlee Vance has complained about in the past.

Stone’s book hasn’t been particularly newsworthy for years, so it’s a bit weird that three different BI authors should write five different stories off it in very quick succession. So, why is BI publishing them, and why now? Is there some kind of internal BI book club going on? Is it just coincidence? Or is this some kind of unlabeled sponsor content?

Once again, there are more questions than answers. And, once again, it’s fair to ask: Who cares?

The fact is that media consumers come across situations like these every week, if not every day. If we even bother to ask the questions any more, the answer is nearly always the same: ¯\_(ツ)_/¯. There’s no real reason to try to think about these issues, because the answers, if they even exist, are murky, and almost impossible to find, and probably wouldn’t help illuminate anything anyway. We’ve moved from a world where the line between editorial and advertising was clear, to a world where it has blurred to the point of nonexistence. We lost our signposts, the sun kept on rising in the morning, and we kinda forgot that we ever cared about them.

I’ll leave it to more earnest media critics than myself to try to make the case that this matters, that we’re witnessing a gradual erosion of trust in the media at exactly the point at which such trust is needed more than ever. I’m sure you can write it as easily as I can: Once people no longer place stock in the principles of editorial integrity, then something something Trump something.

I suspect those arguments are probably true, but at the same time I too have been worn down, and at some level I can’t really get myself to care very much. To be honest, I’d rather watch a video about chef’s knives. I’m thinking that getting one with a single bevel might be quite cool.